One night in March 2009 a strange occurrence happened to me. I was ploughing late in readiness for sowing Spring barley and had intended to work until 10.30pm. As I was turning the tractor at one end of the field and preparing to drop the plough into the ground for the next furrows, I became aware that something or someone was holding me back. I felt as if two hands were pressing against my chest but I could see no one in front of me, just the front of the tractor and the field illuminated by the tractor lights receding into the darkness beyond. I was actually feeling the pressure however and an overwhelming sense that I should stop ploughing and walk home to get my metal detector. This was happening in a part of the field where I had found an Edward III groat a few years ago, and was probably why I thought about the detector. Returning with the detector and using the lights of the tractor, I started to search and quickly picked up a signal. I then dug to reveal a silver penny, which I later found to have been minted between 1148 and 1152.

If I ever doubt that I had this strange experience, I just take a look at the silver penny (shown below). 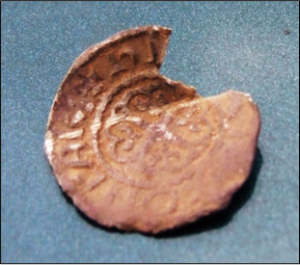