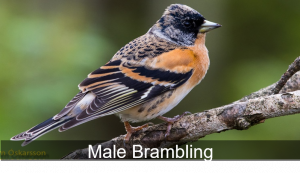 Gale force winds and snow signalled the end to yet another mild, dry autumn. Benign weather meant that many garden flowers were still in bloom. Now we should have winter thrushes around the village but reports from Scandinavia suggest that flocks of fieldfares have still to migrate, probably due to the mild weather and lack of snow. A sudden cold snap with north winds will bring whooper swans and pink footed geese south, using the Swale Valley as a route. Do look out for them. Those of you with feeders should expect an influx of birds over the next few weeks. Chaffinches will be regular visitors but there has been an eruption of bramblings from the continent. They are similar to chaffinches but more colourful and tend to mix together.

White-tailed eagles have returned this year, and 2 have been hunting rabbits in the Snilesworth area of the North Yorks Moors. For details see Roy Dennis Wildlife Foundation where there are super graphics of their travels.