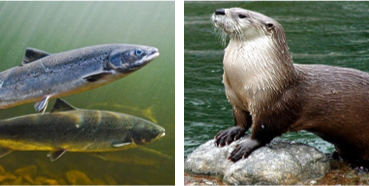 The main physical feature of Scruton is the river Swale which essentially forms the eastern boundary of the parish. It is a fast-flowing river which has created spectacular meanders and is, on a geological time scale, rapidly changing its course. Walking along Common Lane onto the embankment and looking to the right, you will see the remnants of a meander in the field at least 30 or 40 metres from the present river. It is here that some older residents of the village used to swim as children. Following the Swale downstream the river has cut a 3 metre wide channel in the last five years, creating a sizeable island. The last two floods have seen the neck of the next meander broken through, which may well lead to the creation of an ox-bow lake.

The Swale is home to a diverse variety of fish: chub, trout, grayling, barbel and pike in excess of 25 pounds! An exciting addition to the river is the return of salmon, which, as an indicator species, confirms the improved purity of the water. In early spring river lamprey swim upriver to spawn on the gravel beds; they turn over the gravel and leave large areas clear of weed.

With all this food in the river there has been a significant resurgence of otters in the past decade, in addition to cormorants, kingfishers and the occasional mink! The next few days should see the return of the first oyster catchers and with increased daylight, more bird song and spring flowers.