June has been sunny but dry, making it difficult for many birds to feed their young.  The pair of blackbirds in our garden have nested twice but failed to rear any young.  On a positive note the wagtails, which regularly nest under our solar panels, have raised two young. Ken Ross reported that his blackbirds had bred well and recounted that last year a pair of wagtails had nested in his tractor and successfully raised a brood despite his continuous use of the vehicle! 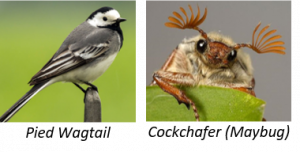 You may have noticed the ending of the dawn and evening choruses which tend to be dominated by blackbirds.  They will become less evident in July as they moult, hiding in shrubbery and keeping a very low profile.  If you sit out to enjoy the evening sun you will have to put up with the monotonous cooing of wood pigeons and collared doves.

Butterflies have been scarce, with odd sightings of small tortoiseshell, yellow tip and red admiral.  While gardening one evening recently I was “bombed” by a cockchafer or maybug. After the initial surprise (it is 3cm long) I realised I had never seen an adult before but had occasionally dug up their large white grubs (5cm long).

Recent sightings include a cuckoo heading east, probably returning to Africa, and frequent views of a hobby,  probably attracted to the swallows and house martins nesting in the village.