Summer came to a sudden stop on Bank Holiday weekend with strong northerly winds significantly reducing the air temperature. Despite this we still have a handful of nesting house martins and a pair of swallows. The swifts left at the end of August but most unusually one pair nested late in the season and did not leave until the evening of Wednesday 26th, ahead of the storm. 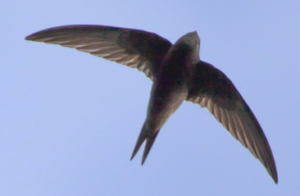 On leaving the nest young swifts will not put their feet on the ground for four years, feeding and sleeping on the wing. On reaching West Africa they will spend time refuelling and then head off on a grand tour of Africa spending Christmas in Mozambique and then starting the return journey north via the Congo and then West Africa for a few weeks of refuelling before the last leg to Scruton!! This will only take two or three weeks. They have been known to fly 5,000 kilometres in 5 days!!
The winter migrants will start to arrive before the end of September, first redwings then fieldfares.