At 7 am on 12  December the thin waning crescent Moon will be low in the SE, with Venus to the lower left. This should be a spectacle as the Earth will be illuminating the night hemisphere of the Moon. 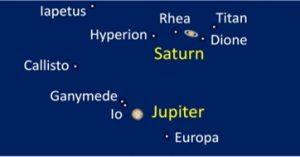 The maximum of the Geminid meteors takes place on the 13th. Geminids may be seen from the 4th to the 17th, and the maximum this year is very favourable because there is no Moon to interfere. This ‘Shooting Star Shower’ is the richest of the annual showers. Meteor rates can be around 100 per hour. December’s New Moon is at 4 pm on the 14th. The Winter Solstice takes place at 10 am on the 21st. The Earth’s north pole is tilted as far as it can be away from the Sun and this day is the official start of Winter.

Jupiter approaches Saturn for one of their closest conjunctions on this day when the two planets are separated by only 0.1°. Look for them with binoculars, low in the SW at around 5 pm. With sufficient magnification, you may see the four major satellites of Jupiter and Saturn’s rings. This is a rare occurrence and I would urge you to witness this interesting event.