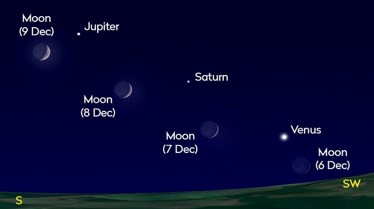 This month there will be a magnificent parade of planets after dark. The new Moon on 4 Dec. means that for a few nights there should be excellent viewing, since moonlight will not obscure the fainter stars. After sunset the planets can be seen towards the western horizon. Jupiter will be shining high in the south and Venus low in the southwest, with Saturn in between. A slim, crescent Moon will pass along the line of planets on successive evenings, visiting Venus on 6 Dec. It will be between Venus and Saturn on 7 Dec. appearing as a slightly larger crescent, and between Saturn and Jupiter on 8 Dec. as a quarter-lit moon. Finally, on 9 Dec. a third-lit Moon will be in conjunction with Jupiter. Altogether a wonderful sight over a few nights.

The Winter Solstice on 21 December is regarded as the first day of winter and the shortest day of the year.