Skies are gradually getting darker, and a New Moon on 7 September means there will be a better opportunity to view the sky since there will be no moonlight to interfere. On 14 September, when the planet Mercury appears at its farthest from the Sun, will be the best time to catch a glimpse of this often elusive planet. Look low in the western sky just after sunset. On 20 September there will be a Full Moon, which is often referred to as the Harvest Moon.

The Autumn Equinox occurs on 22 September which is when the Sun is directly above the Equator, and all parts of Earth experience equal day and night. For us in the Northern Hemisphere, days will gradually get shorter after the Autumn Equinox. 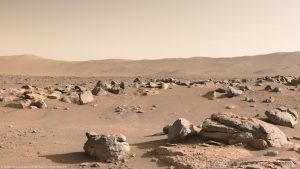 Finally, how about this photo taken on 14 August. It looks just like a hot day in the Sahara possibly, but it’s on Mars!