So far June has been anything but ‘flaming’ with strong north and easterly winds bringing cool, damp weather from the North Sea. Despite this the rooks have fledged and peace has returned to those who live near the Green! We have a good number of house martins nesting in the village, but only a few swallows and five swifts. Unfortunately we only have one pair of spotted flycatchers at the top of Ham Hall Lane. Normally there is a pair on the Green, but they failed to return. 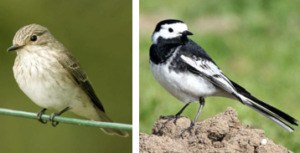 On a brighter note Sandra and I have a pair of wagtails nesting in the garrya bush near our back door. This morning the female left the bush with an eggshell in her beak. Fingers crossed, local cats don’t find the nest!