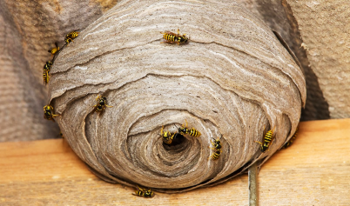 For the past month I have been watching a queen wasp building its nest in my wooden garden shed. It started by making a small, umbrella-shaped dome, hanging down from the roof. In order to do this the wasp chewed wood with its strong mandibles, mixing it with saliva to form a papier-mâché to construct its nest. During the building process brood cells are created, into which the queen lays her eggs. Prior to hibernating, the queen will have mated and then found a comfortable place to over-winter. The young grubs are fed on insects and larvae, and when they become adult workers they will enlarge the nest while the queen concentrates on egg laying. At the end of summer special cells will be constructed for drones and queens.

At the moment the nest is about the size of a golf ball with an entrance at the base, and my relationship with the queen is good. However, with the thought of lots of workers coming and going, a reckoning may not be too far off! 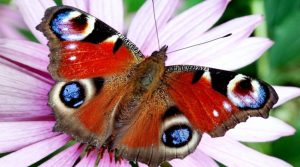 Significant numbers of house martins and at least twelve swifts have returned this week, and the recent rain will help with nest building. Butterflies are about, especially peacock, orange tip, small tortoiseshell and painted lady. Two villagers heard a cuckoo at the beginning of the month and the osprey has been seen again fishing along the Swale. It could be a juvenile that has decided to summer at Scruton! Apparently last autumn an osprey with a locator spent two weeks on our stretch of the river but no one saw it.