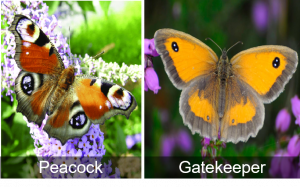 The third weekend in August (21st & 22nd) saw the first significant rainfall for several weeks. Before this rain, the north-westerly airstream brought many swallows and house martins to Scruton which appears to be a refuelling station on their migration to Africa. On several mornings, flocks of approximately a hundred martins were furiously feeding over the village and particularly around a large sycamore tree which produces masses of small insects. In between bouts of feeding, the martins rested on Margaret Ward’s pantiled roof before taking off in one flock heading south. The swifts, which appear to have bred well this year, left on 10 August, since when most of our village swallows and martins have also departed.

Prior to the last couple of weeks, this summer has not been good for butterflies but recently, as well as tortoiseshell, peacock and red admiral, I have had gatekeeper, wall, and comma in the garden not to mention many large whites!