Following a forty-year long upward trend, 2020 may have been the warmest year on record in the UK. The impact on nature is incremental and slow changes are not very obvious.

Trees are coming into leaf and birds are nesting earlier. Some birds, such as wood pigeons and collared doves, are nesting all year round. Flowers are blooming out of season. I have lupins, roses, heuchera, hebe and primulas all in flower and my unprotected rhubarb is at least eight inches tall. Many birds have stopped migrating, including greylag geese, curlew and the occasional black cap and chiffchaff. We currently have over four hundred curlew, who would normally go to the coast, wintering along the Swale. 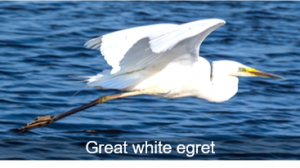 Birds such as the little egret, which were uncommon ten years ago, are now seen here regularly; one has been spotted feeding in the field opposite the pub. A great white egret has also been seen at Romanby Golf Course and in Bolton on Swale in the last two weeks.

What of the future? A continued influx of wildlife from the south, red kite, Cetti’s warbler, ring-neck parakeet, hummingbird hawk-moth and Egyptian geese – one was seen recently on flood land at the rear of Morton Flatts Farm.