Comet NEOWISE was visible low in the north sky during July, and with darker skies, will still be visible during the first weeks of August. Look out for it now – it won’t be back for 6,800 years! 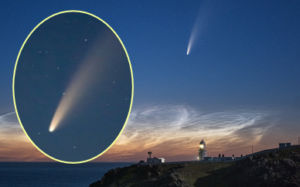 Mars will become a bright, spectacular object in the early morning sky, high in the south. At this time no other object can rival it except Venus and the Moon. The planet is receiving a great deal of attention at the moment as the UAE and China have launched spacecraft towards it in July. The US rover ‘Perseverance’ should hopefully have successfully launched by the time you are reading this. All 3 craft are due to arrive around February next year. The UAE craft ‘Hope’ is an orbiter, but the Chinese and US are landers.

One of the best meteor showers of the year will peak during the early hours of the morning on 12 and 13 August. These meteors are called the Perseids. Expect to see 80 or more meteors per hour. Viewing conditions should be fair but the Moon, which is just past quarter in the morning sky, may interfere somewhat.