The night skies are fairly ‘quiet’ this month with a full Moon on the 27th. There is, however, a close encounter on the evening of the 18th between the crescent Moon and, just above it, the planet Mars. But a far more interesting event at about 7:15 pm on the 18 Feb is the arrival at Mars of NASA’s Perseverance mission. This mission was launched last July and will land in Jezero crater for a planned year-long exploration in an attempt to answer the question ‘Was there ever life on Mars?’ 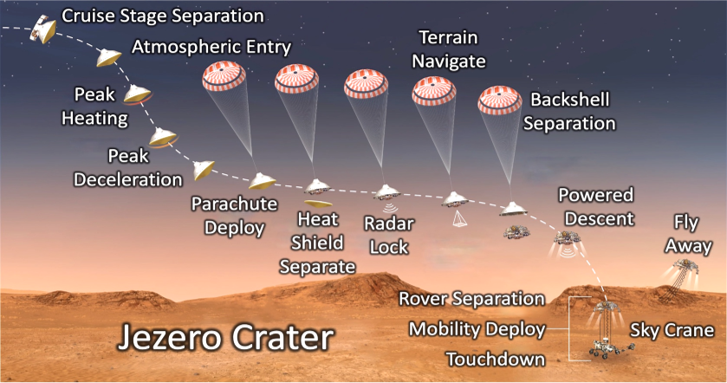 Landing on Mars involves a nail-biting descent, which NASA describes as seven minutes of terror. This has to slow the craft from an entry speed of 12,000 mph. There is deployment of a huge parachute followed by firing of powered descent rockets to slow it to 2 mph. A sky crane then lowers the rover on 3 bridle cords for the final 50 feet, until it lands gently on its 6 wheels. It all has to be autonomous and NASA’s control centre will only find out 11 minutes later if the landing has been successful.

The primary purpose of this mission is to gather and store soil samples for collection by a future mission. The rover will also dispatch a small helicopter called ‘Ingenuity’ to test the technology and to scout various targets for further investigation. All very exciting, and the landing will be streamed ‘live’ on NASA’s YouTube channel.

So, when you look up at the close encounter on the evening of the 18th, you will be looking at Mars just after the arrival of the new explorer.