Twilight begins to persist all night with no truly dark nights until the end of July. Now is a good time to see Noctilucent Clouds. These are thin, high clouds of ice crystals that catch the light of the sun, which even at midnight is not far below the northern horizon. These clouds are like silvery blue veils, often with interesting textures and patterns, low in the northern sky and visible an hour before and after midnight. 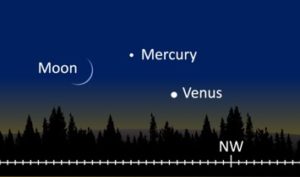 Mercury should be visible in the NNE sky from the 12th onwards, best seen on the evenings of 21st and 22nd May when it is within 2º of the much brighter Venus. Around 10pm on 24th, the thin crescent Moon appears just below both planets. Venus sets four hours after the Sun at the start of May, but by the end of the month it sets with the Sun.

Posted in Sky at Night