Darker skies mean better viewing in November. From the 5th onward, the constellation Orion is visible, low at first in the ESE sky but rising higher, ending November fairly high in the SE.

Around 6am on the 13th, we should see a wafer thin crescent Moon with earthshine on its night hemisphere. It lies between Venus and Mercury in the increasing twilight, low in the ESE.

Mars is visible during most November nights. As the month progresses, it will fade in magnitude. The waxing gibbous Moon may be seen just to the south of Mars, and the pair will be high in the southern sky around 9pm on the 25th. 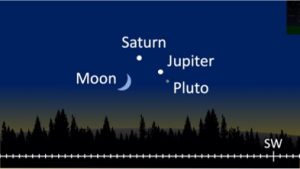 Around 6pm on the 19th, the broad crescent Moon passes just to the south of Saturn and Jupiter. They are in a nice grouping, low in the SSW. Pluto is also there, but you would only see it with serious technical kit! (see graphic).